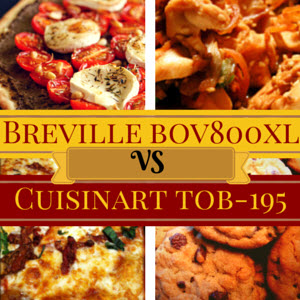 Two big names go head to head in this comparison of the Breville BOV800XL vs the Cuisinart TOB-195 toaster oven. The big questions is whether or not the higher price of the one is justified by better performance, longevity and functionality.

In many ways, the two are very similar. They’re both sleek, stainless steel, and offer convection cooking features for foods that are more evenly cooked more quickly than you’ll get with a regular oven.

However, there are some differences and those differences could mean the world to you depending on how and what you want to cook.

Each of these toaster ovens has a cool and jazzy name for their heating technology. Is it just fancy smoke and mirrors to make you think you’re getting something more or is it really unique? And, if unique, does it improve the performance?

In this case, we ARE talking about technological advancements over other ovens. 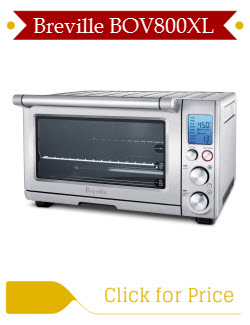 Let’s look at the Breville Element IQ technology first. You’ll see in the side by side chart below, I mention that this oven has between 1500 and 1800 watts. There are five heating elements inside the BOV800XL.

Each of the pre-sets is programmed to drive the heat at different levels of power to those five heating elements in order to get the best results for that particular kind of cooking. For some settings, the heat might be distributed more to the top elements and others to the bottom elements. In some cases, they’ll be distributed to the outer elements more strongly than to the center heating element.

For example, if you’re doing a bagel and using the Bagel pre-set, heat and power to the five elements will be different than if you were using the Toast pre-set. The oven “knows” that bagels are thicker and will use a slightly different arrangement of heat in order to get the best results. It’s like they’ve taken all that human knowledge about where to place your food in relation to a heat source for certain foods and programmed it into those pre-sets. Takes all the guesswork out of cooking.

With nine different pre-sets, there’s a load of fine-tuning built into this machine for better results than you’d get out of even your full-size, conventional oven. You can further customize the pre-sets and the toaster oven will remember your settings so you can use them again next time you’re doing a bagel, toast, cookies or your favorite casserole.

So, in the case of the Breville, there’s certainly upgraded technology that’s meaningful and adds value.

Breville’s designers and test staff explain how and why the Element IQ came to be. 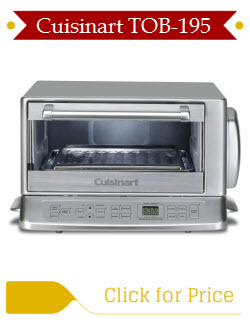 The Cuisinart has its own enhanced heating technology called Exact Heat. This consists of a sensor inside the oven that reads the temperature and adjusts it throughout the cooking process to keep the temperature at the desired setting.

Sometimes an oven’s internal temperature goes down or up depending on the food being cooked. In the TOB-195, the sensor constantly keeps an eye on the true temperature inside and modifies it as needed to keep it even. This is a unique feature that you won’t find on many other toaster ovens.

The difference between the two is that the Breville is significantly more intuitive and adjusts applied heat and power designed to give the ultimate results for different kinds of cooking functions. The Cuisinart enhancement, on the other hand, simply ensures a consistent temperature inside and the heating elements are not adjusted for different foods.

How Else Are They Different? Zeroing in on the Facts

Since so many features are the same, it’s easier to just focus on the things that are different between these two toaster ovens.

Price – The Biggest Difference of All

The Breville BOV800XL costs more than the Cuisinart TOB-195 by $50 even at the lowest available prices online.

What Does the Extra Money Buy You?

If you’re considering buying one vs. the other and the price is a sticking point, you need to understand what you get for the extra $50 and if those extras are worth it to you.

First, you do get 3 extra included accessories with the Breville. Even if you assign a nominal $10 value to each of those pieces, there’s an explanation for $30 of the price difference.

After that, you’re looking at the value to you of the Element IQ technology for finer results, the small amount of additional interior space, and the preference for one set of controls (dial) vs the digital controls of the Cuisinart.

One other thing to consider. Quite a number of consumers have complained about a strip of metal that exists between the door handle and the unit itself on the Cuisinart model. That strip of metal gets so hot during cooking that you almost can’t open the door without burning yourself so it’s important to use an oven mitt even to open the oven. Just know that going in if you choose the Cuisinart.

Both models have excellent ratings, reliable performance and a very low complaint rate when you look at the percentage of issues compared to the overwhelming number of positive reviews and experiences. Either one would serve you well. The choice comes down to just a very few differences.

Which Model Should YOU Buy?

You’ve read the comparison, you understand all the differences and now it’s time to choose, right? If you’re still stuck and money’s not an issue, I’d go with the Breville. The company has a reputation for great customer service, the controls are slightly easier to use, and the Element IQ will give you just slightly better results. It has the edge when it comes to performance.

If the price is just too high, take a look at my list of the best rated models under $100.

Side by Side Comparison – Dimensions, Accessories, and Features

This chart provides a look at a list of all the features side by side so you can compare the interior and exterior measurements, capacity, presets and accessories.

After reviewing all of the facts regarding these two models, did one stand out as a better choice for you? Hopefully, you’ve been able to make a decision and are ready to buy your brand new toaster oven. Feel free to let me know what you think below. Happy cooking!