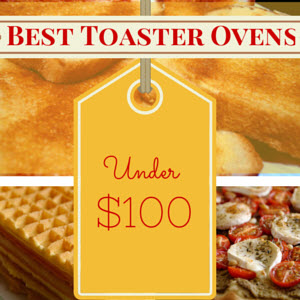 After hunting, reading and researching, I put together the definitive list of the 5 best toaster ovens under $100.

I was amazed at how difficult it was to gather this information but in order to choose the model I thought would serve my family most efficiently, it seemed it had to be done.

Once done, it made sense to share it online so no one else would have to scrounge around for the facts necessary to compare these models side by side. Here’s hoping this list helps you choose wisely, too! 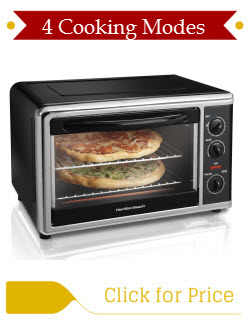 One thing became very clear as I was researching toaster ovens and that was that the interior dimensions are even more important than the exterior dimensions. The more space you have inside, the more flexible the oven is and the more different kinds of cooking and baking you can do.

The Hamilton Beach 31100 gets a boost because not only is it reasonably priced at under $100 but it comes with two racks set up in such a way that you can use both at once. This means you can do more cooking in less time.

The combination of broiling, convection oven, rotisserie, strong consumer ratings, interior dimensions, and dials which let you set the temperature just where you need are what place this number one on my list.

Pros – Here’s Where it Excels

Cons – Things to Keep in Mind

These few things could have been better and this is where it didn’t rank so well against the other models: 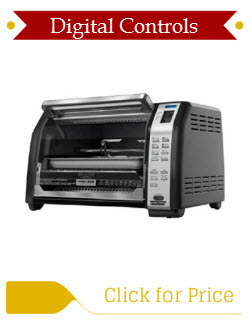 While the Black & Decker is still under $100 it costs nearly as much as the #1 model but makes up for the difference in features by having the best digital control set up with more pre-programmed settings than most. The buttons are easy to read and responsive to your touch without much effort. Some digital panels are overly complicated but not this one.

The Black & Decker CTO7100B Toast-R-Oven is a convection oven with rotisserie capabilities and can handle baking, cooking, and simple jobs like toasting your favorite snacks.

Because the Black & Decker CTO7100B Toast-R-Oven is digital instead of dial controlled, it’s important to understand that you are limited to setting temperatures in 25 degree increments. You can set the temperature for 350 degrees but not for 340. Since most baking and cooking temperatures end with 00 or 50, this shouldn’t be a huge issue for most people.

What makes the CTO7100B number two on the list? Here are its strengths: 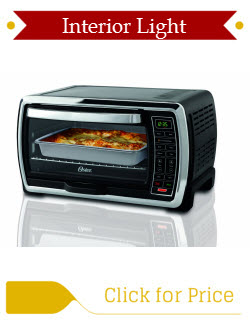 They may have called it a “Large Capacity” toaster oven but that’s a bit misleading. It’s neither the largest outside nor inside – but it does have the second largest interior space of the models on the list so I’ve forgiven them.

What really makes this one stand out, though, is that the Oster TSSTTVMNDG has an interior light – something none of the others have. If you are going to do a lot of baking and need to check on the look of your cakes and cookies without having to open the door, this is the ideal choice.

I’m not the only one who likes the Oster TSSTTVMNDG Toaster Oven. It had the second highest number of ratings online with a very positive average score. It also won a product award in 2011 so it’s no slouch, for sure. It has a nice, clean design and looks good in any kitchen.

Pros – A Lot to Love

The Oster TSSTTVMNDG makes the cut for having the following features:

Cons – What to Know Before You Buy

It didn’t make #1 for the following reasons which you’ll want to keep in mind: 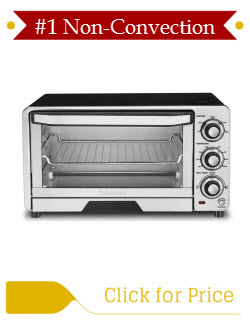 Anyone who appreciates the look of fine kitchen appliances will recognize even from a small picture of the Cuisinart TOB-40 that this is one gorgeous toaster oven.

It’s sleek, shiny stainless steel and looks ready to do anything you need.

The Cuisinart TOB-40 has the highest number of ratings online with the highest average score. It has a beautiful, modern design and looks good in any kitchen.

The Cuisinart TOB-40 has several features that make it worth consideration:

Cons – Didn’t Hold Up in These Areas

It didn’t compare as well as the others in these categories: 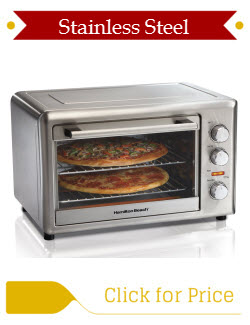 Hold it – this one looks a little familiar, doesn’t it? That’s because it’s identical to the #1 product on the list – the Hamilton Beach 31100. The only difference is that this one is in stainless steel instead of black.

So, if it’s identical in features and has the largest interior, why isn’t it tied for #2? Because this model costs more than the black model and is the most expensive option on the list. If you want this color to match other appliances, it’s only about $10 extra and you still get all the great performance.

The Hamilton Beach 31103 Convection Toaster Oven is a top performer, has high ratings, and the most space inside. The dual rack feature means you can cook more food all at once so it’s perfect for larger families or those who like to entertain.

To read the pluses and minuses of the 31103, follow this link back up to the description for the 31100 toaster oven:

Compare Toaster Oven Features Side by Side

This very detailed chart shows the interior dimensions, exterior dimensions, features, and accessories of all five toaster ovens so you can see how they compare at each point including: compatible baking dish sizes, temperature range, watts, and outlet type. 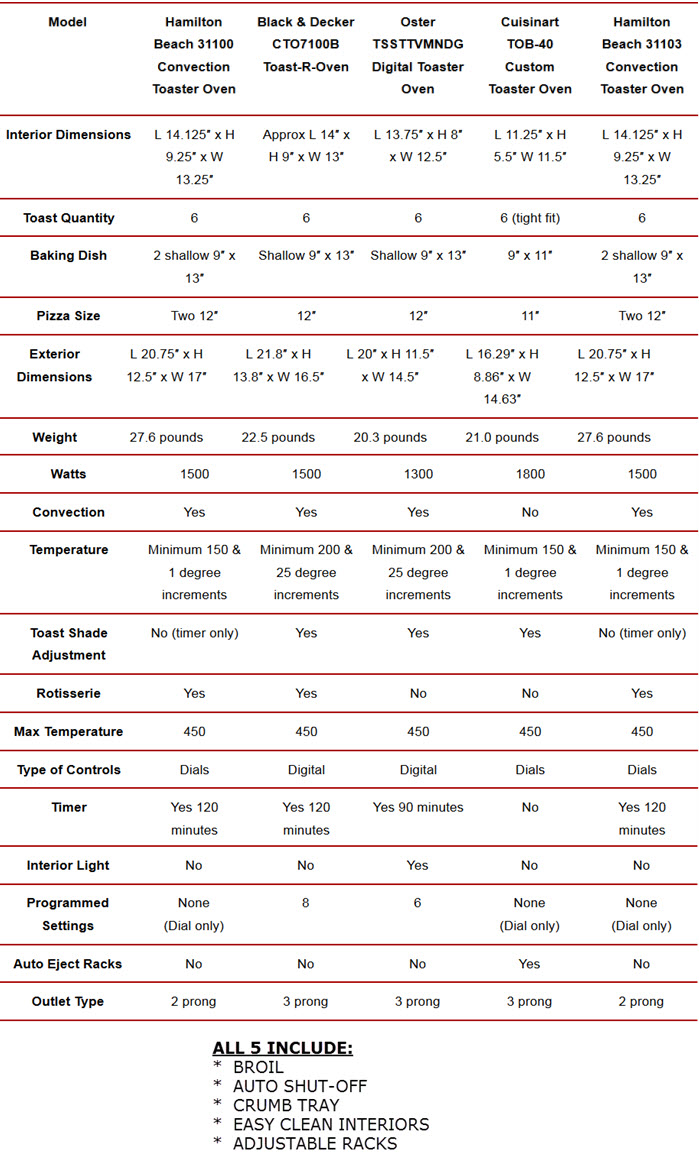 Turns out, I was. Convection heating is an upgrade to regular ovens. It uses a fan at the back of the unit that cycles the hot air in and around the food which ensures an even cooking temperature no matter where the food is positioned. As a result of more air being circulated and the even heat distribution, cooking times are an estimated 25% faster. No sneaky microwaves are nuking your food. It’s just a fan blowing the hot air around – much like the fan in my bedroom in the middle of summer here in Phoenix.

This is why the Hamilton Beach toaster ovens can stack two pizzas, two casserole dishes, or two trays of cookies at the same time and yet get them all done perfectly. In my regular oven, if I try to use both racks I have to switch the food around half way through the cooking time.

So, if you’re going to buy a toaster oven anyway and you can get one with convection heating for less than $100, then you’ll find you can get more done than just toast. It’s highly likely you’ll find yourself gradually using your range less and the counter top model even more.

This video gives you some tips for using a convection oven.

Choosing Between Digital and Dials

Who doesn’t love digital these days? Cool LED screens and push button controls. We love them on our phones, our bathroom scales, and our home security systems.

This isn’t a flaw. In the past two years of preparing family meals, I can’t think of a single time I had to set the oven for something that wasn’t divisible by 25. My meatloaf is 350, my casserole is 350, heating up frozen foods is 400 or 450. I’d be just fine with increments of 25.

However, there are people who need the option to get their temperature at the perfect setting for the type of area they live in or for certain foods they cook on a regular basis. If you think you need that level of control, choose a model with dials. For most people, the digital models will work just fine.

Another point to consider between the two control types is whether or not anyone in the house has difficulty grabbing small knobs. Things like arthritis and carpal tunnel might affect grip. If that’s the case in your household, buttons might be a better choice.

I mentioned I might show you the spreadsheet I used to gather my information and here it is – just a quarter of it, actually!

After watching my mother-in-law make excellent use of her toaster oven during a family gathering, I decided we needed one for our house, too.

I thought it would be so easy to pick one but that was actually quite difficult. Watts, timers, interior space, prong types – did I need convection or not? I’d find what looked like a good choice only to discover that it was missing something I thought was important or didn’t have good ratings from other users. Some product descriptions were missing key pieces of information which made comparing them even more complicated.

So, the analytical nerd that I am, I created a spreadsheet. I developed a list of the most important features, found the 30 most popular models online and started hunting down the facts for every one of the 30 models. I assigned a weight to each of the factors, scored the products, and calculated the results.

Performance and flexibility were rolled in by considering how the combination of features for each model determined the kinds of cooking each could handle.

Finally, I read thousands of reviews online to find all those niggling kinds of things that were either praised by consumers or that were found bothersome.

The data was tallied and resulted in these top 5 toaster ovens that all cost under $100.