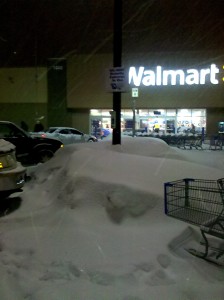 What do family road trips and this Walmart parking lot image have to do with each other? Well, sit down and let me tell you about a funny story that happened to us on the way to visit my parents a couple of Christmases ago.

Yup, it’s a road trip memory – one that belongs just to my family and I. It’s one that comes up every time we get into those “Remember the time…” conversations. The kids love this one in particular because it demonstrates that their parents are not mistake-proof or perfect.

You see, there are five in my family and my parents live on the other side of the country. To visit requires plane tickets, packing, and getting out of the house at a particular time. Flying all of us at the same time is expensive and stressful. Do we have enough suitcases, food for the plane, games to keep the kids occupied, the plane tickets? Who is picking us up and what will we do for transportation while visiting? (I’ve built a whole list of tips for parents flying with small children.)

My husband has never been big on flying. He thinks it’s one of those things every one should do at least once and then, having done it, should only do it again to get to someplace to which they absolutely cannot drive.

So a couple of years ago we started driving to my folks instead of flying. Although we still have to go through the same circus routine involved in getting three kids packed up for a couple of weeks and we still have to make various pre-trip preparations, there’s no rush to get to the airport by a certain time. If we leave an hour or two earlier or later, so be it.

The first such trip was made during the summer and was uneventful. That was a set up but we didn’t know it at the time. Later that year we thought we’d make the drive again for the Christmas holidays. My husband might not like flying but I don’t like driving in the snow so we went back and forth a bit on whether driving was really a wise move at that time of year. “Don’t worry” said my husband, “we have four wheel drive.” Those words would come back to bite him for a lot longer than he ever expected. (Of course, the fact that I fell for that has not been ignored by anyone, either.)

We were driving from Phoenix, Arizona, to Pittsburgh, Pennsylvania. That means going right through the Midwest and a pretty good chance of seeing some of that white stuff I’d worried about. Sure enough, we weren’t a couple of hours from home and we saw our first bit of snow. Flagstaff already had a couple of inches on the ground.

We oohed and ahhhed at how pretty it looked. Silly people.

By the time we hit New Mexico it was snowing heavily and I received a text from my father – weather control central for any of his kids who might be traveling – explaining that a big storm was headed to New Mexico. 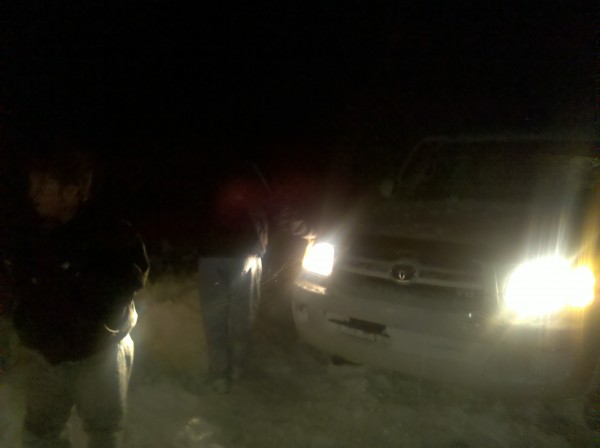 It shouldn’t have come as any surprise to us then when the police started closing off the freeway and diverting all traffic to the nearest exit ramp. That’s how we ended up in a small city in the middle of nowhere at midnight a couple of days before Christmas.

While discussing our options at McDonald’s – which we could only reach after we got out to help a fellow driver move his slipping car out from the middle of the exit ramp – we came up with the brilliant idea of finding a side road that would run along the closed freeway and maybe find our way to a section that was open and get back on the road. This seemed like a good idea because, of course, we had 4 wheel drive. 😉

This side road we found had been plowed but only enough to allow for two lanes and no shoulder. We crept along at a snail’s pace with a few other drivers who must have had the same idea. A few cars were coming the opposite direction, too, and we realize now that they had probably already tried the route and found it wasn’t going to work.

As one car passed us going the other direction, our car started heading off the road – just a little at first. I looked over at my husband with that look we wives get. You know the one…the “What do you think you’re doing?” look. While I was still giving him that look our car started to slide and then I caught my husband looking back at me with the most surprised expression I believe I’ve ever seen on his face. “What are you doing?” I asked. “I’m not doing it at all!” he replied.

We kept sliding – right off the road, down a ditch and finally came to rest about 20 feet off to the side. As the car slid it acted like a shovel pushing snow up against the passenger side so high that we couldn’t open the doors on that side. There we sat very silently for a minute or two digesting what had just happened.

The kids were completely confused not having any experience at all driving in snow. They started plying us with questions and we explained we had a bit of a problem and were stuck. “But we have four wheel drive!” someone chimed in and that’s been the core memory of that story ever since.

One policeman, two tow trucks and about an hour and a half later and we were out of the ditch and on our way back to the McDonald’s to come up with another plan. We decided there was little choice but to get a hotel room and wait out the storm. Unfortunately, all the hotels were booked at that point. We’d waited much too long to make that decision.

The little city was jam packed with stranded 18 wheelers and travelers. Cars and trucks were parked along the side of every road, waiting it out in grocery store parking lots and many – including us – found light, shelter and available bathrooms by spending the night in the Walmart parking lot. Bless their souls for staying open all night so we could buy food, water and use the restrooms. 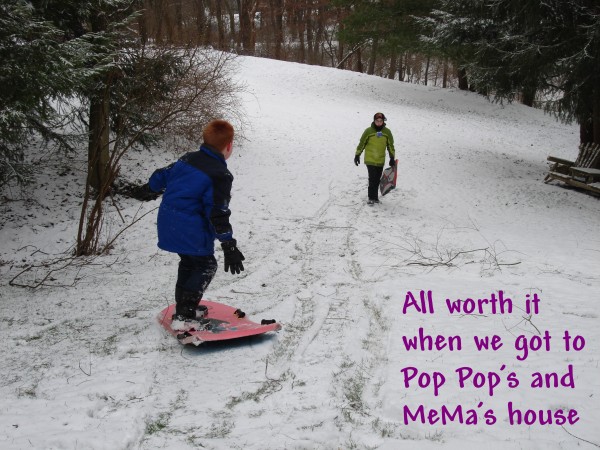 There’s a lot more to the story and the kids remember every detail. What’s fascinating, though, is that while they complained about being stuck in the car the first time we drove (the uneventful trip), they haven’t complained since the winter mishap. They now look forward to the possibility of new stories and memories that might come from any trip we take together.

Family road trips are the kinds of events that will live with kids forever, that will be the things they tell their own children about, and that will shape their childhood memories. They’re bonding moments that stick despite what frustrations they may have caused during the actual event. They make us laugh together as a family.

There’s another road trip story the kids like to share that includes the case of the disappearing pillow, commando crawling at 2am and the blanket-stealing brother but I’ll save that for another time.