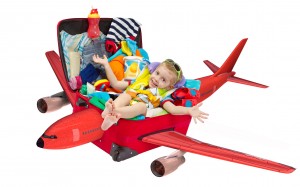 At some point, it’s likely to happen. You want to take your little one (or two or three) on a plane. Airplane travel with infants and toddlers can be a trying experience. Here are my tips for how to get from point A to B without losing your mind.

I will never forget the first airplane trip I took with my newborn son. I was so excited to take him to my parents’ house. Little did I know what I was in for. Fifteen years and two more kids later, I’m an expert.

And, no, you can’t stick them in the overhead bin!!

“In America, there are two classes of travel: First class, and with children.”

I Said Don’t Kick the Seat!

I have three boys – ages 19, 16, and 10 – and my first flight with a child was when my first son was just a few months old. Easy, I thought – my 5 month old and I on a plane for five hours from Portland, OR, to Pittsburgh, PA. How hard could it be? Ha! By the time I landed, I was dying of thirst, covered in spit up, my son was in desperate need of a diaper change, and I had cramps in muscles I didn’t know existed. I’ve since made around 20 flights with my children and have a stack of tips to share with other parents.

Tip: Take a travel blanket with you and tuck it into the seat pocket in front of your child. It will help keep their feet from being able to do too much damage to the person sitting in front of them.

Best Seat on the Plane for Kids

Bulk head or the last row

If you book early, you may be able to grab the bulkhead row. There is extra leg room which means, if you have a child who is old enough to stand, you can more easily let them stand while you hold onto their hands giving your lap, and your child, a much needed break.

My second favorite row is the last row on the plane. Bathrooms conveniently right behind you.

If you sit in the bulk head row, you don’t have a seat in front of you under which to stow your carry-on. This will have to be placed in an overhead bin until after take-off – a minor inconvenience considering the benefits of being in this row.

These days, with airlines packing their flights to the brim and with frequent fliers fighting for these prime seats, these are hard to come by and some airlines even charge an extra few bucks to get in the first few rows after first class. If you have a long flight, that extra space might be worth the money. 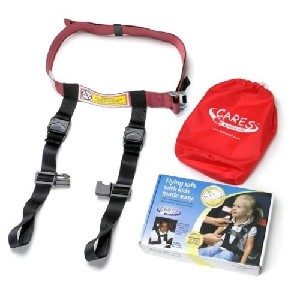 For kids who are older than 12 months and up to 40 inches tall, you can get this airplane restraint system. The Child Aviation Restraint System wraps around the plane seat and provides a harness style, snap-lock belt that fits kids.

It holds them in their seat more like the seat belt in a car. It protects kids from slipping and sliding around as they might with just a lap belt.

Plan Plane Activities Ahead of Time

Crayons, Toys, and Other Distractions

Crayons and coloring books are a good way to keep small children occupied, but be prepared to lose a few. These easily roll off of trays, onto the floor and are nearly impossible to retrieve. Even if you can retrieve them, you don’t want to spend your flight doing so.

Bring toys that aren’t too small, don’t roll, and won’t hurt if accidentally thrown at the person sitting next to you. It happens.

Clogged Ears, Pain and How to Help

As planes change altitude, mostly during takeoff and landing, the pressure impacts our ears. Babies and children are more susceptible to this than adults – hence, the crying jags that rattle the nerves of parents and fellow passengers alike.

Tip: Have something handy for a child to suck on or chew during the flight, especially during takeoff and landing – a pacifier, a bottle, a lollipop, a piece of gum – all, of course, dependent on their ages. The sucking and chewing motions help relieve the pressure in the ears and can ease the pain a child feels. Which, by the way, will make you less stressed than if you’re having to comfort a screaming child and wishing you could hide in the bathroom for the rest of the flight. 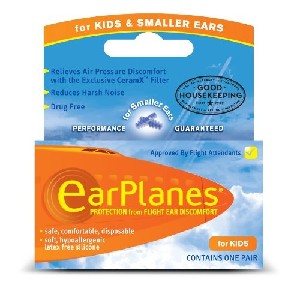 These little things look like ear plugs but are made to keep the pressure from building up in kids’ ears and causing that the pain that makes them scream on board the airplane during take-off and landing.

Even adults know that pressure that builds up while you fly can cause your ears to hurt and feel clogged even hours after you’re done flying.

Use these Kids Ear Plugs For Airplane Travel to prevent the pressure build up in kids ages 1-10 years old.

(And, yes, they make these for adults, too!)

You can’t take liquids through airport security and this includes baby milk (even applesauce and yogurt, as I discovered recently). Bring powdered, pre-packaged formula in single feedings. The airline will heat water for you to make a bottle.

Food on airplanes is rather expensive ($7 for a small lunch box) and the selections are usually unappetizing to small children. Pack dry cereal, cut up fruit, raisins, crackers, and other snacks your toddler will like.

Try to plan an infant’s meal (breast or bottle) to take place during take-off and landing if you can. This, as I mentioned in the section on ears, will help make sure your child is hungry enough to suck on the bottle during those times that cause them the most pain. Often, this will cut down on the crying and screaming that makes a parent feel completely helpless.

Keep food in these handy cups 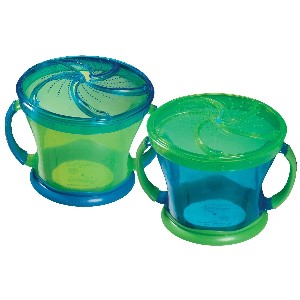 Little fingers drop food during travel on an airplane and the last thing you want is to be stepping on a bunch of crumbs in your row or sitting on them throughout the flight. These great travel cups keep food safe and have a little gasket like opening so kids only pull out what they need. The rest stays in the cup no matter what.

Munchkin Two Snack Catchers are easy to fill but not easy to spill. The top has a soft plastic cover with a swirl shaped opening. Kids can reach in to grab their snack but the cover pulls back in place so snacks don’t spill out if the container is dropped.

You get a pack of two in assorted colors. They have a small handle on the side that’s perfect for small hands.

No Roll Away Sippy Cups

Handy straps keep cups with you 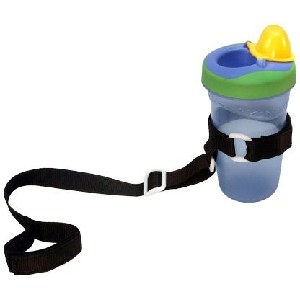 Ever had to chase a sippy cup down an airplane aisle? They’re round, kids drop them and then they roll away and end up under the feet of someone 10 rows back. These cups have cool straps so you can attach them to a seat restraint, part of the chair, your wrist…wherever…and they’ll stay with you through the flight.

Booginhead SippiGrip make sure your bottles and sippy cups aren’t going to get away from you mid-flight.

Sippy cups must be empty when you go through airport security so buy your drinks after you get through. Bring them on the plane with you so you wont have to wait for the drink cart when your kids are thirsty.

Sippy cups must be empty when you go through airport security so buy your drinks after you get through. Bring them on the plane with you so you wont have to wait for the drink cart when your kids are thirsty.

Straps your car seat to your luggage 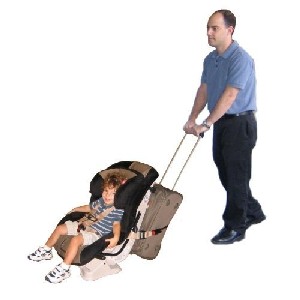 A bag for me, a bag for each child, suitcases, strollers, and car seats? How on earth – you think to yourself – am I ever going to make it through the airport much less to my final destination? Grab handy wheels like these and easily zip your stuff along.

It seems you never have enough hands when you travel with a baby or toddler. Save yourself some hassle if you’re taking the car seat along and use the Traveling Toddler Car Seat Travel Accessory safely attach the car seat to roller luggage.

You can push both your luggage and your child without having to also unpack a full sized stroller.

The Food Tray is Not a Toy

Once a child sees how that little tray flips down, they want to try it too, and their fascination will go on throughout the whole flight. Suddenly, they have control of something and kids love to control things (do you blame them?). It makes them feel older and bigger. However, that tray going up and down can be felt by the person in front of them and it’s darn annoying. Instruct younger children that the tray is off limits and that if they need the tray, you will take it down and put it up.

Peek a Boo with Other Travelers

Fun for a few minutes…

I’ve bounced a standing child on my knees during a flight to keep them occupied. This quickly becomes a game of peek a boo with all those faces they can suddenly see all around them from such a high position. No doubt, your child – if not too shy – will find a kind soul somewhere on the airplane who starts a game of peek a boo with them. Suddenly, instead of a simple little exercise to pass the time, your fighting to get your child to settle down and they are pulling against you to keep up the game. When that happens, have a toy or snacks ready to pull out and distract them or your thighs are going to be numb before the flight is over.

Prepare them for flying 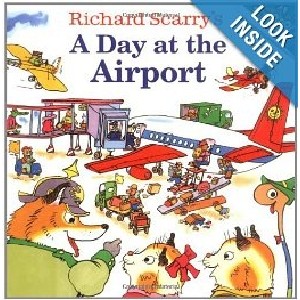 If this is an older child’s first trip on an airplane, you can help them get comfortable with all that they’re going to see, hear, and feel by helping them go through this book by one of our favorite authors, Richard Scary.

A Day at the Airport Book gives children an overview of everything that goes on at an airport.

What’s in an airport? Luggage, people, ticket counters, airplanes and gates. Kids love to know what’s going to happen when they fly.

Should kids be allowed to stand up in the seat?

Sure, he’s cute and all, but most travelers aren’t looking for entertainment when they’re on a flight. Don’t let your child do what this kid in the video does during his flight. Not only is it annoying, but it’s highly unsafe. I’ve been in several airplane flights that hit unexpected and shocking turbulence that would have sent someone to the ceiling were they not buckled in and I’d hate for that to happen to anyone, especially a child.

I don’t care what the little seat belt light says, my kids are not allowed to take their seat belts off in an airplane except to go to the bathroom or for a few minutes of stretching.

Have you ever had to do airplane travel with kids? Tell us your story, tips, and fears below. All of us who have “been there/done that” have horror stories but can now look back at them and laugh. So will you.

However, I’m proud to report that as my youngest is now 10 years old, I’ve passed the point where I’m dealing with small children on a plane and it’s absolutely marvelous! You will get there, too!